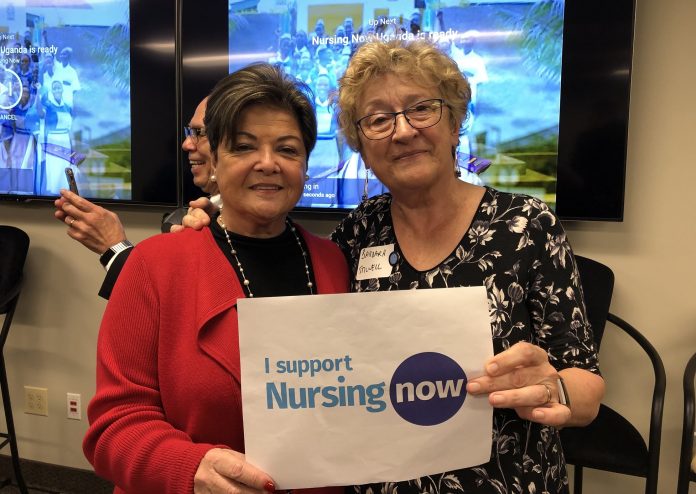 Nursing Now is delighted to announce the appointment of Dr Barbara Stilwell as Executive Director for the Nursing Now campaign. She will take up the post on July 16th 2018.

The campaign’s Co-Chairs, Nigel Crisp and Sheila Tlou, welcoming the appointment, said: “We are delighted to have been able to appoint Barbara Stilwell as Executive Director of Nursing Now. She brings to the post enormous experience and expertise not only in nursing but in development work in many different parts of the work. This will be invaluable in ensuring that we remain a truly global campaign and can improve health globally by raising the profile and status of nursing.”

Barbara Stilwell responded, “To be given the chance to lead this global campaign to advocate for nurses and nursing is an honour. I have been fortunate enough in my career to see what nurses do around the world, caring for the sick and keeping people healthy, often in challenging conditions. And yet the expertise of nursing is often overlooked by policy makers and governments, with too little investment in educating and supporting nurses. The Nursing Now campaign brings nursing voices together so nurses will be heard around the world. I am so pleased to be able to be one of the loud voices for Nursing Now.’’

Nigel Crisp and Sheila Tlou also expressed the gratitude of the whole Campaign Board to Dr Catherine Hannaway who has been successively Project Manager and Acting Director of Nursing Now saying, “Catherine has been terrific as Project Manager and then Acting Director over the last year. We simply wouldn’t have got where we are without her. We are delighted to say that she will be staying with the campaign in a senior role – so we won’t lose her experience, knowledge and commitment.”

Dr Stilwell has worked throughout the world as a champion for health workers and strong health systems. She is currently IntraHealth International’s senior director of health workforce solutions and recently served as director of a health workforce and systems strengthening project in the West Bank/Gaza. From 1996–2006, she worked with the World Health Organization (WHO) in health systems development, co-authoring the WHO’s 2006 Health Report, collecting and analysing data regarding the impact of migrants on health systems in developing countries.

Dr Stilwell has helped countries around the world to manage change and development in their own health workforces – and help health systems become more resilient and responsive. Her cutting-edge research and work at the WHO helped galvanise global attention on the health workforce crisis. Her work at the country level has helped governments make evidence-based policy and program decisions to improve the performance, motivation, and retention of health workers. She has supported the education of nurses in Africa, Australasia, the Caribbean, Eastern Europe and the Middle East.