Earlier this year, Nursing Now Liberia was launched as part of the celebrations for International Nurses’ Day in Monrovia. More than 150 nurses and student nurses attended the event, joined by the Ministry of Health, NGOs and other high-level stakeholders.

Mrs. Tarloh Munah Quiwonkpa, Liberia’s Chief Nursing and Midwifery Officer, officially launched Nursing Now Liberia, giving an overview of the global campaign and stating that it is time that “Nurses stand out and speak out.”

Mrs. Shirley G. Seckey-Fahnbulleh, focal point for Nursing Now Liberia, spoke passionately about the many difficulties that nurses and midwives face in Liberia: From being overworked and under-paid, to poor support and having to work with inadequate equipment and resources. She said it would require nurses everywhere to lead changes, but would also require support from Government and government partners.

Representatives from the Global Fund, Jhpiego, the World Bank, the West African College of Nursing (WACN), the Liberian Board for Nursing and Midwives, the Liberian Nurses Association (LNA) and the Liberian Midwives Association (LMA) all paid tribute to the extraordinary role played by nurses and midwives in the Liberian health care delivery system, and pledged their support for the Nursing Now campaign in Liberia by signing the pledge. Marion Subah of Jhpiego seized the spirit of the launch when she said, “We are ready to take on the challenge of enabling nurses and midwives to stand up, take a seat at the table and speak up as leaders.”

“This was a powerful and emotional launch with obvious energy and commitment from nurses and their many supporters, including the government. It was a privilege to be here and a great experience to hear the nurses singing so passionately about their commitment to their profession,” Gloria Stevens, President of the Liberian Nurses Association. 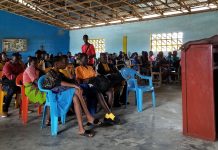